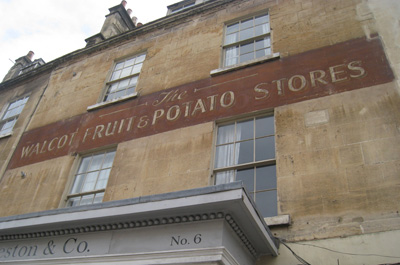 On the corner is The King William, a nice pub/restaurant with a good range of drinks on tap and no TV screens or slot machines. Continue along the London Road towards the next crossing. As you walk along see if you can spot the 'Walcot Fruit & Potato Stores' ghost sign on the other side of the road. Two buildings to the right of the ghost sign is No 4 Walcot Buildings which was once the Black Dog beerhouse (nothing to do with the Black Dog ceramics business you come to a little later on!). This building was cleaned in 2014 but if you look very carefully you might make out the letters AOB which straddle the first floor windows.

Continue on to the pedestrian crossing.

Optional Route - Click here to explore the Snow Hill carbuncle built in the late 1950's along with the tower block of Berkeley House and Dover Place.

Use the pedestrian crossing to cross the London Road. 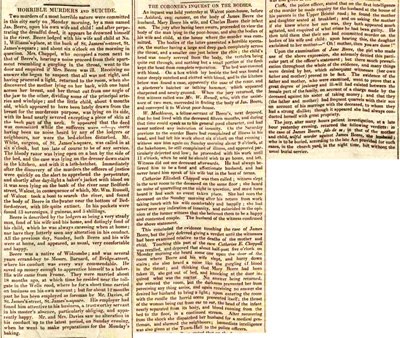 Further along the road look out for the pet shop ghost signs dating from the late 1950's. Look for Bedford Street on the right as you continue on. This row of houses once ran down to the river until a flash flood caused by melting snow tore away the houses closest to the river killing several of the inhabitants. Bedford Street was also the scene of a drowning after a double murder in November 1829. James Beere lived close to St. James Square with his wife Mary and their baby son Charles. James was regarded by his work colleagues and neighbours as being a hard working and caring person. The day before the murders he was reported to have complained of 'illness in his head' and went home early from work. The following morning he went to work but left to go home in the morning. Later that night he took a razor and slit his wife's throat and almost decapitated the baby. The blood-soaked clothes James had been wearing were found on the river bank near Bedford Street. His body was found in the river at the bottom of Bedford Street. An inquest into the murders took place at the Walcot Poor House.

Further along just past No. 29 are two large pillars for an entrance to what was once the Walcot Poor House built in 1768. Large gates would have once hung on these pillars to prevent the 100 or so inmates from absconding. It also housed a factory where 20 boys and girls were employed making pins. The Tudor style façade was added later and the poor house became the Sutcliffe Industrial School, 'designed', according to its prospectus 'to put down juvenile begging and vagrancy'.

The Fortt, Hatt & Billings building was a furniture depository but before that it started life as the Kensington Brewery some time before 1800. Bath had many breweries and several of them were located along the London Road.

The next building that now houses Richer Sounds started life as the Porter Butt Inn which is first mentioned in 1787. There is still evidence of it being a pub with the sign above the door and stained glass windows. The pub had a pretty 'lively' reputation and it finally closed its doors in 2009. 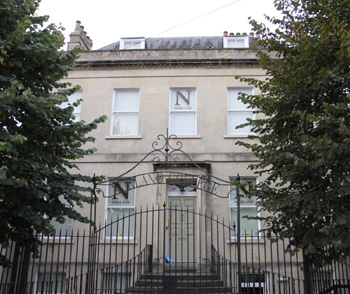 At the entrance to Morrisons stands a grand house on the right originally known as York Villa built before 1787. It became the Norland College for training nannies for wealthy clients. There are two stories of its early days; one that it was the residence of the Duke of York who kept one of his mistresses here and the other that it was a high-class brothel. The evidence favours the brothel. Bath was famous for its brothels and the ones at this end of town were considered to be at the top end as the women of ill repute were rarely prosecuted due to the social cachet of their clientele. York Villa at the time was on the edge of town and high class prostitutes regularly travelled from London to ply their trade at this and other top-end establishments.

Carry on to Meadows Lane unless you would like to cross the road to do the optional route.