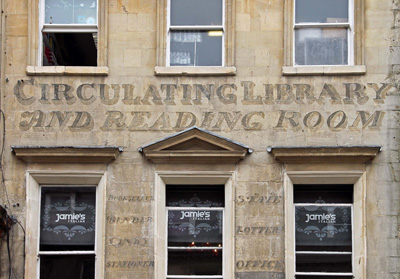 Starting from the Guildhall follow the route into Milsom Street and keep a lookout for two ghost signs. The sign 'Circulating Library and Reading Room'. The sign dates from 1823, when Francis Joseph, who had taken over the shop the year before, opened a state lottery office there. His timing though was unfortunate as the government decided to phase out state lotteries in 1826. The 'Brush Manufactory' run by John Strawbridge was operating here for just six years making upmarket brushes for dressing tables of the gentry.

Make your way to Camden Crescent making use of the crossing points. You might like to visit The Assembly Rooms or The Museum of Bath Architecture which has a fascinating display about how much of Georgian Bath was built along with a very large model of the City of Bath. 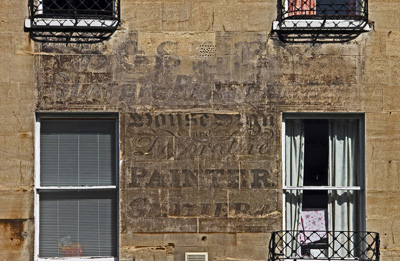 Before turning right into Camden Road you can see another ghost sign of R. Bosley who was a sign writer who demonstrated his artistry with fonts on his advertising sign. He was also a plasterer and slater. In his early 60's he fell 30-40 feet from a roof injuring his back and breaking several bones but this didn't stop him going back to work. People seemed to be made of much tougher stuff in those days! There is the remnant of another huge sign on the side of the same building. Although badly faded it reads 'FOR SAFE MILK, THE BATH & SOMERSETSHIRE DAIRY CO LTD'. Unusually for Bath this sign has no connection to the building but is probably a bit like the use of billboards today.

Camden Crescent was built by John Eveleigh for Charles Pratt, Earl of Camden. If you look above the doorways you can see rather strange variations of elephants' heads. These were the crest of John Pratt. It does give the impression that they might not have been entirely familiar with what an elephant head looked like. 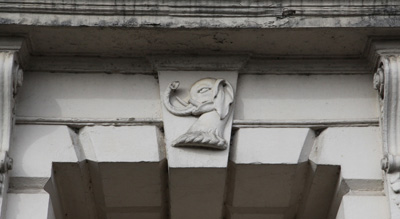 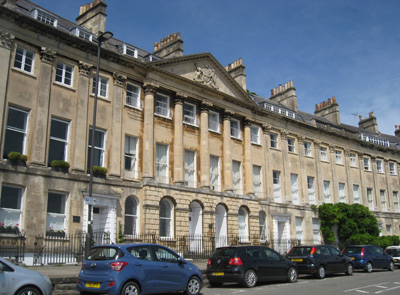 The first stone in the crescent was laid in 1787 but the decision to build on this slope was badly misjudged. If you look at the central house with the five columns, then right and left, you will notice that there are only four houses on the right compared to ten on the left. For the following explanation, you need some imagination for the houses that don't exist beyond the four remaining houses on the right. The house on the far right in the original plan was started first but when work began on the others in between the ground gave way leaving a part completed house at the end. This survived for a few years as a romantic ruin before it too collapsed during a thunderstorm.

There are a couple of viewpoints along this road with good views over Bath. Further along turn right into Gay's Hill which quickly drops downhill. A short distance down look out for a painted sign on the left which reads 'The Asylum for the Maintenance and Instruction of Young Females in Household Work'. This was founded in 1819 to house destitute girls between 12 and 14 and train them so that they could be employed as servants. The asylum remained active for just 12 years until it ran out of money. During that time there had been typhus and by its closure 61 girls had been placed in service, eight discharged for ill-health, three expelled, five had died, and 17 were left in the asylum. It would seem that there were good intentions for the asylum but it met a sad ending. 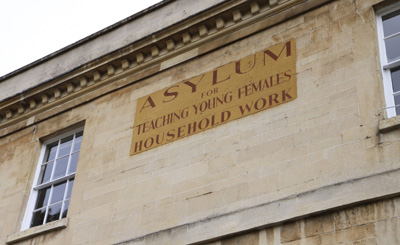 As you head downhill look out of a path on the left opposite Alpine Gardens and before the start of Clarence Street. This path leads to the delightful Lyndhurst Terrace with a shared front path and garden. Drop down some steps to the road and continue downhill to the very busy London Road.