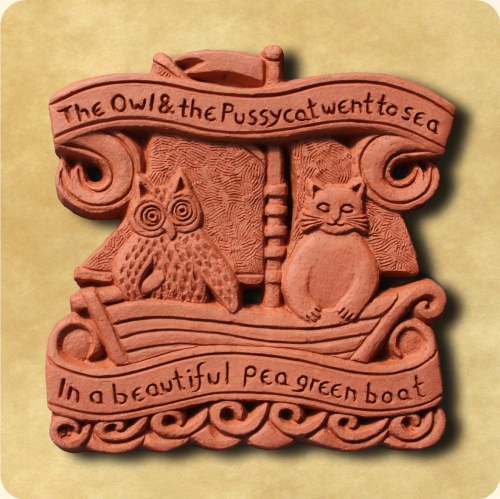 Edward Lear (1812 – 1888) was an artist, humorist and traveller. He wrote his famous poem ‘The Owl and the Pussy Cat’ for Jane Symond’s three-year old daughter, Janet. This, his second nonsense book, was published in 1871, titled, ‘Nonsense Songs, Stories, Botany and Alphabets’. His first ‘Book of Nonsense’ published in 1846 was written for the grandchildren of the 13th Earl of Derby. He illustrated his limericks and nonsense songs with his inimitable humorous drawings. This amusing wall decoration incorporates the first two lines of the poem. We designed the tile with its merry interpretation of the story for parents and grandparents to give to their offspring as a protest against the growing tide of plastic toys.

The first few lines of this lengthy poem read:
"The Owl and the Pussy-Cat went to sea
In a beautiful pea-green boat.
They took some honey and plenty of money
Wrapped up in a five-pound note ......"

However, the verses which refer to the nuptials of the happy couple make it a favourite poem to be read at modern weddings and it is often given as an extra wedding present.

Fixing Points: the holes in the curly ends of the top banner
Dimensions: 10.2cm x 10.5cm