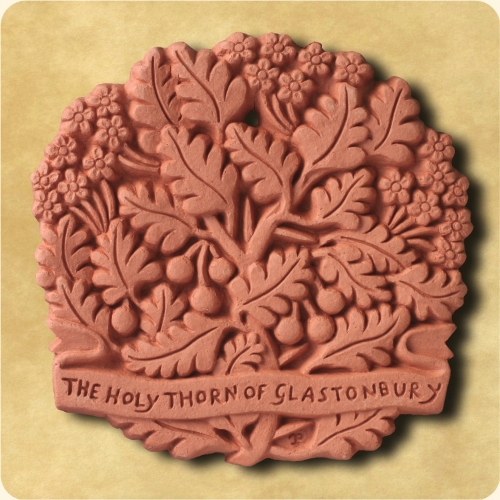 Legend has it that Joseph of Arimathea – great uncle of Jesus – sailed to Britain after the crucifixion and landed on the Isle of Avalon. This was the hill in Glastonbury, Somerset now known as Wearyall Hill. Weary, Joseph thrust his staff into the fertile earth and by the next day the stick had rooted and was to become the first Glastonbury thorn tree. It is on this spot that Joseph is reputed to have built the first Christian church in England. The original holy thorn tree was destroyed by the Puritans, but cuttings were secretly taken and survive to the present day. The miraculous thorn flowers at Christmas, and a sprig of the tree is presented each year to the Queen by a Glastonbury school child. It can be seen on her desk when she talks to the nation on Christmas Day. The thorn on our tile is based on a medieval drawing. It is a favourite souvenir of Glastonbury, a centre for pilgrimage.