A personalised dove tile for a peaceful message During the 12th century a new form of sculpture appeared around Kilpeck in Herefordshire. This style has become known as the Herefordshire School of Carving. The dove in this design, with foliage entwined beneath its tail feathers, is based on stone carvings in the nearby church of St Peter, Rowlstone.

We have adapted the Dove of Peace design to accommodate 18 characters on the top half and the bottom half of the circle.

Fixing Points: the holes in the corners of the tile
Dimensions: 10.2cm x 10.2cm

This tile supports up to 36 characters comprising of the following: 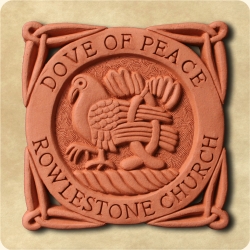 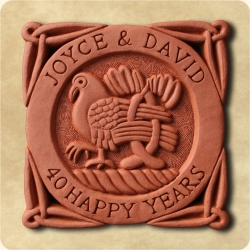