A personalised angel for spiritual numbers The angel looks upwards in hope. This image is based on the highly decorative ceramic tiles that can be seen surrounding the doorway of the Watts Chapel in Compton village near Guildford in Surrey. Mary, the wife of the painter G.F. Watts, designed and built the chapel between 1898 and 1904 with help from many local people. The building is a unique mix of art nouveau, Celtic, Romanesque and Egyptian styles. The exterior of the chapel is covered with decorative brickwork. This, together with the richly ornate gesso interior, reflects Mary’s wish for a symbolic fusion of the universal laws of justice, charity and love.

This tile supports up to 5 characters comprising of the following: 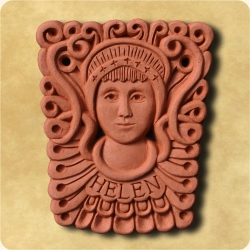