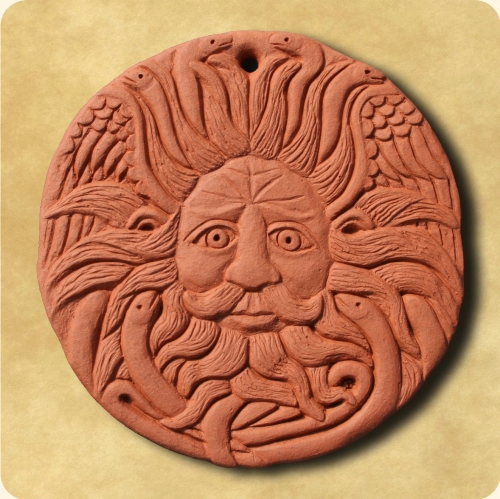 This tile is an accurate small-scale replica of the Gorgon’s Head from the Roman Baths in Bath. Discovered in 1790, the head is one of the finest pieces of stone sculpture known from Roman Britain. This glowering face was the central feature of a pediment set above the entrance to a temple dedicated to the Goddess Sulis Minerva. Snakes can be seen entwined in the beard and hair, as well as feathered wings above the ears. The head, despite its masculine features, is thought to depict the Medusa, a personal symbol of the Goddess. This complex and intriguing design contains elements reminiscent of Celtic art combined with strongly classical iconography.

Fixing Points: One hole: at the top of tile
Dimensions: 10.8cm